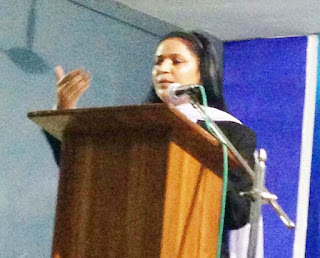 She said that on the program special pray/fasting for justice Asia Bibi, Sawan Masih and other Christian who are in prison and waiting for justice. She appealed to all priests Pastors Nuns prayer group, Human Right Organizations that they should raise the voice and pray for the Asia Bibi, Sawan Masih and other Christians who are waiting for Justice and facing falls blasphemy charges.

Supreme Court of Pakistan is going to hear Asia Bibi on 13 October 10, 2016 who is in jail from last six years; we pray for her that she may be get justice from Supreme Court of Pakistan.
I am thankful to all Christian who stayed in fasting and prayed for her. This program is held in Karachi Seminary, in that event a large number of people from different thought and clergy participated.