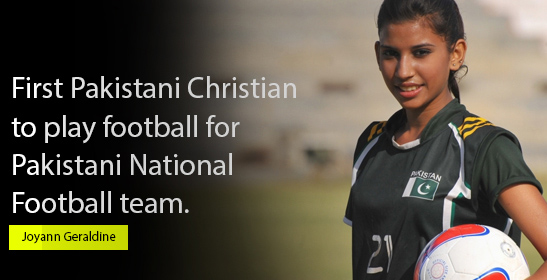 Hailing from a compound in Karachi she is a student at St. Joseph’s Convent High School and is a part of the Pakistan National Women’s Football Team and Balochistan United. She plays at the mid-field.

Joyann made her international debut in football in November 2014 and her debut game received international acclaim, as she was representing the Pakistani Christian Minority. She developed a passion for playing football at a very young age after she saw the video of Brazilian football player Pele.

Joyanns mother Joyce Christina was also a sports woman but had to quit after she faced discrimination. She was a gold medalist in the 1500 meter race event. Despit receiving some threatening messages on her mobile phone, Joyann has not deterred from her goal. She says that the team has always made sure she feels at home. Joyann Geraldine Thomas manages time for her football matches, practices and studies. Her selection for the National Football Women’s Team of Pakistan has made us proud of this young star of ours.