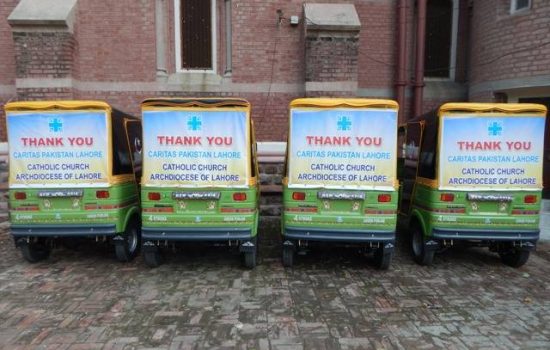 Rickshaws distributed among the families of those who lost their lives in Gulshan-e-Iqbal park blast. This endeavor was taken up by Caritas Pakistan, which looks forward to succor the affected families. The foundation which is a social wing of Catholic Church, had facilitated at least four families will now be able to make a living, after losing their loved ones.
In a tone-down distribution ceremony held at the Sacred Heart Cathedral Church on August 17, 2016 four rickshaws were handed out to the families of those who had lost their lives as a result of the Gulshan-e-Iqbal Park blast. Archbishop of Lahore Sebastian Francis Shaw handed out these rickshaws to the families of the deceased. At this occasion, he assured the bereaved families that the Church is standing by the them and shares in their sorrow.
Archbishop also expressed gratitude to the Federal and Provincial governments who had been aiding these victimized families. He further appreciated the role of the Civil Society, NGO’s, humanitarians and the hospitals which had been succoring the victims of the Gulshan-e-Iqbal Park blast. He also urged for a need to promote peace and brotherhood.
Previously in May 2016, cheques were distributed among those who had sustained injuries in the blast. This financial assistance by Caritas was meant to succor the injured, so that they could afford medical treatment. At this occasion, National Executive Director of Caritas Pakistan, Amjad Gulzar reiterated that Caritas stands with the indigent and needy. “Our efforts for the betterment of the victims will be continued.”
At the same time, Diocesan Program Coordinator/Head Operations – Caritas Pakistan Lahore, Roger Noor Alam thanked all who had been involved in the project and urged for further collaboration. Separately, victims have been assisted by several other people including Psychotherapist Ms. Jahan Ara who had administered trauma counseling to the victims as well as Mr. Raja Imran, Ms. Firdous Karman Toshi, Ms. Asma Yaqoob and Mr. Naeem Naz who had been pivotal in the organization of this event.