It was onaired at aaj tv and that was the reason Talibans started to prosecute her and wanted to earn heaven killing or converting one more Christian! 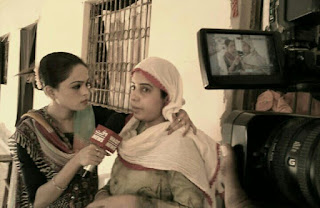 But she did not stop n kept promoting the christian community which was not appreciated by the extremists,after which Sara Alfred was being threatened continuously , followed, Her brother was beaten by unknown,her’s and her family’s activities were monitored minute to minute, threatening letters from unknown, untraceable phone calls, attack on her car, attack on the channel where she was working and the documentary was on aired (AAJ TV) and most of all abduction of her daughter which actually made her to find protection away from home (Pakistan).
Sara Alfred was continuously forced by extremists to convert to Islam , was given a tough time at her work places , which made her switch different channels thinking she would get saved from the butchers but nobody helped her, nobody had a solution for her and she and her family was at the risk of death and the only reason was that she was a christian,a true follower of Christ!

Some unknown gunmen also opened fire at her home at midnight, They wanted to do the same what they did with Shahbaz bhatti and hundreds n thousands of other Christians in Pakistan.

But God provided her the way , protected her because God is our shelter and prayers of millions of Pakistani Christians helped her survive!

Lets all pray that God protect her and her family and she comes back on screen soon to glorify the name of God!
Amen