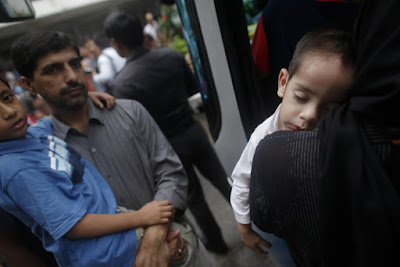 The country has been rocked by a series of bomb blasts over the last few days which have claimed the lives of four people and injured dozens of others, which are thought to have been perpetrated by Muslim separatists.

Now Pakistani Christians, who arrived in Thailand to escape religious persecution in their own country, fear they may be swept up in an ensuing crackdown on illegal immigrants following the blasts.

The wave of attacks came just nine days before the anniversary of the Erawan Shrine Bomb attack, in which 19 people were killed and 129 injured. In the days following that attack, hundreds of innocent Pakistani Christians were targeted in a nationwide crackdown on asylum seekers in Thailand.

According to a recent BBC documentary on the issue, there are currently some 100,000 asylum seekers in Thailand, of which the largest group, around 11,500 people, have fled persecution in Pakistan. There, Christians risk their families being ensnared in debt bondage, false accusations of blasphemy against Islam resulting in the death penalty, mob attacks, and forced conversion to Islam.

Many flee to Thailand as plane tickets are relatively cheap and they can enter on tourist visas. However, despite the high numbers of refugees seeking shelter in Thailand, very little protection is afforded by the state, if any, as Thailand is not a signatory to the 1951 Geneva Refugee Convention or its protocols. Consequently, the asylum seekers are considered, under Thailand’s Immigration Act, to be illegal immigrants subject to arrest, detention and deportation.

A report undertaken by the All Party Parliamentary Group for International Freedom of Religion or Belief (APPG IFoRB) – a committee of British Lords and Parliamentarians – found that their illegal status means that most Christian asylum seekers in Thailand live precariously in the country.

“Due to Thailand’s provisions, Christian asylum seekers often live in a desperate state of poverty with little or no access to job opportunities, education and healthcare,” the report noted.


“Most urban asylum seekers in Thailand live a precarious existence: unable to work or send their children to school, financially stretched, dependent on ad-hoc charity to survive, at risk of exploitation and constantly worried about being arrested and detained indefinitely in abysmal conditions in immigration detention centres,” the report continues.

Those arrested by immigration officers are charged fines in the region of $130, and then held in detention centres, where they are kept until bailed at a further cost of more than $1,500. Conditions within the centres are poor; men are segregated from women and children but all are squeezed into communal cells with very little personal space.

Those who cannot pay the original fine are held in jail until they can, whereupon they are moved to the detention centre.

The United Nation’s Refugee Agency, the UNHCR, has been tasked with assessing the claims of each applicant with a view to either granting them recognized refugee status and moving them on to a country with a UN resettlement quota, or returning them to Pakistan. But although the initial assessment is supposed to take six months, in practice there are long backlogs creating a waiting time of two to three years, all of which is spent living in the shadows. Relocation can take a further two years.


The situation is exacerbated for Pakistani Christians as the UK Home Office’s Country Information and Guidance Report on Pakistani Christians and Christian converts, which states that such individuals are not at “a real risk of persecution” in Pakistan, is being used by the UNHCR to justify unduly prolong granting asylum to Christians fleeing Pakistan – or even to not recognize their claims.

As the report by the APPG IFoRB details:

when discussing the processing of Pakistani Christians with a ‘senior official who works for the UNHCR’ at the detention centre, it was made clear to Lord Alton that this individual held a negative option towards the Christian asylum seekers and, by referencing the Home Office Country Guidance on Pakistani Christians and Christian Converts, did not believe them to have been at a ‘real risk of persecution’ for their faith in Pakistan. Deporting them was not seen as a process dangerous to the Christian asylum seekers.

Following the bomb attacks, Pakistani Christians now fear a perfect storm of circumstances which could see them returned to Pakistan to face further persecution and uncertainty.

Kathriya Louis, a Pakistani-Christian living in Thailand, spoke of her fear of immigration round-ups following the bombings.

“I feel devastated. We are only two months away from our refugee determination interview [with the UNHCR],” she said. “We were hoping to escape the violence of Pakistan and torture in Thailand, but now we may all end up like criminals, despite our innocence.”

Calling for help from western citizens, she added: “Please recognize our plight, we have held pariah status in our homeland for our faith and now suffer because in Thailand we look like extremists. None of our situation is our fault yet our lives have been shattered and our hopes dashed time after time. I ask people in the west to speak to their politicians and call for a sanctuary for Christians.”

In a bid to raise awareness of the situation in the West, the British Pakistani Christian Association (BPCA), which has been working with persecuted Pakistani Christians in Thailand, has set up a petition calling on the Royal Thai government to stop oppressing refugees and to stop returning Pakistani Christians back to Pakistan “where they face death at the hands of extremists.” It has also called on the government to allow the refugees to work while waiting to have their claims processed.
Wilson Chowdhry, Chairman of the BPCA said: “The tragic loss of lives in Thailand, remind us that the extremists that want to divide humanity are un-relentless with their hatred, and that the global community has to be on our guard.

“However, my prayer is that Royal Thai authorities do not unduly punish innocent Pakistani Christians who face terrors like these daily in their beloved but untenable homeland. Victims like Kathriya have lost so much and can see no end to their suffering. Unless the people of the west become more generous and considerate, a life of persecution and re-persecution will become an endless cycle of pain for these victims. I reiterate Kathriya’s concern; where is there a sanctuary for persecuted Christians?”