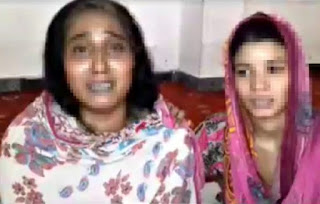 Lahore: Tajpura’s Christian family landed into deep trouble after, Baadal a male family member eloped with a Muslim woman. The Muslim woman identified as Sehar was already married and a mother of two. After her elopement, Sehar’ husband Amir resident of Haji Park Taj Pura neighborhood lodged a police compliant against Baadal and his two sisters Samra and Shagufta.
Soon after the elopement of Sehar with the Christian Baadal; Amir and other Muslim locals started intimidating the Christian’ family and other Christian residents of Taj Pura. They threatened to burn 13 family members of Baadal alive along with kidnapping Christian girls of the hood. Amir tried to harass the Badaal’ family demanding that Sehar’ return. The Christian family maintained that they had no clue about the whereabouts of Badaal and Sehar.
Meanwhile, Shad Bagh police went head over heels, into the investigations and hooked Shagufta, Baadal’ sister on June 25, Friday. She was arrested by male constables and publicly humiliated. Shagufta is still in the lock up, nonetheless, the loudening atrocities were at the vertex when Amir and three of his family members stormed into Samra’ house and stripped her naked in front of her mother, two children, and the her entire neighborhood. The four men beat her, humiliated her in the open.
After the debauched ordeal was over, a neighbor covered Samra up with a shawl. 28-years-old, Samra maintained that she and her elder sister Shagufta had nothing to do with the elopement. She said that it was between Baadal and Amir; and why in the world, she and her sister have to pay for their brother’ act.
Withal, the Shad Bagh Police maintains that this incident of bashing and stripping Samra naked is in on with another kidnapping case which is being investigated upon by the police. Purportedly, policemen helped, abetted and escorted Amir and his accomplices when they broke into Samra’ house.
Source: Taj Pura fiasco: Beating and stripping the Christian woman naked linked with kidnapping case says police