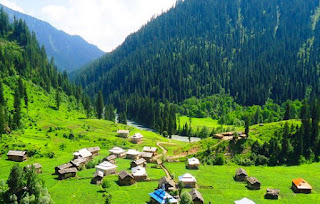 Azad Kashmir is that part of Jammu and Kashmir which is currently under the administrative control of Pakistan. The State of Azad Kashmir is stretches over 13,300 square kilometers. This swathe of land is blissfully blessed with natural tranquility, meadows, pastures, minerals and various other natural boons.
Muzaffarabd is the capital of Azad Kashmir which is home to about 40, 00, 000. The state has 10 districts, 19 tehsils and 122 Union Councils. Bhimber is one of these 10 districts. If we trace the roots of the Christianity in Azad Kashmir, we find that Christianity already existed in Bhimber even before the creation of Azad Kashmir. Bhimber is capital of District Bhimber, which covers an area of 1516 square kilometers. According to an estimate the population of Bhimber has risen to 304, 3000. The 3 tehsils that fall under this district are Bhimber, Samahani and Barnala. District Bhimber’ famous Mir Pur Chowk, which was later named Khaleel Ahmad Chowk was once the hub of Christian population.
Once this place was home to a predominantly Christian neighborhood. However, at the time of creation of Pakistan, majority of the Christians migrated to Punjab and Jammu District of Jammu Kashmir. Nonetheless, after Pakistan came into being, Christians started resettling in their native land Bhimber and started flocking in Mir Pur, Dadiyal, Islam Garh, Kotli, Chakswari, Mangla and Muzaffarabad in pursuit of a livelihood.
There were about 100 prehistoric graves of Christians at the place where now Ashiq Hussain Public School also known as F.G. School stands. The graves were flattened and a school was constructed on top of them.
The current graveyard used by Christians is on Bhimber Samahani Road, right in front of the Mujahid Force Center on a hill top. It is a tiresome and mind numbing task to carry dead body up to this graveyard. Construction of the graveyard’ boundary wall was sanctioned; still this construction project lies thick under the dust in files in government offices.
On 14 October, 2014 a meeting was held in Mir Pur by the Christian community of Azad Kashmir. Representatives of Christians from various districts of Azad Kashmir participated in this meeting. The following points were brought under discussion:
1) Right of citizenship, right to vote and jobs quota for Christians in Azad Kashmir
2) Inadequate places of worship for Christians in Azad Kashmir
3) No graveyards for Christians in Azad Kashmir
4) Implementation on orders of construction of a boundary wall around Christians’ graveyard in Bhimber
Christians of Azad Kashmir are serving in various fields, and many Christian leaders are striving for the rights of Christians on Azad Kashmir. The Prime Minister of Azad Kashmir has made various announcements; however, no implementation has been done. On 21 October 2013, Chaudhry Abdul Hameed stated that Christians will be granted a quota in jobs, educational institutes and medical colleges. At the same time he pledged, to grant land for graveyards, churches and residential areas for Christians.
Current government has marginally acknowledged the presence of religious minorities and has pledged to provide rights to them. However, in the past the government blatantly denied existence of religious minorities in the state. It was when the photos and news of the protests staged by the Christians of Azad Kashmir were publicized that the international community took note of presence of Christianity in the region.
The yellow part in the flag of Azad Kashmir depicts religious minorities. Under the constitution every citizen has been bestowed with the right of religious practice and construction of place of worship. The ancestors of Christians were residing in this region since times old; they left properties for their generations to come. Christians of Azad Kashmir have deep roots owing to their ancestral ties with land, it is challenging task for them to relocate to other cities.
Not only is this an inevitable duty but a moral obligation for the Azad Kashmir authorities to grant Christians the right of nationality. Anticipating that after this commentary finds attention of the representatives in Azad Kashmir’ legislative Assembly, serious steps will be taken in order to meet with the needs of Christians of Azad Kashmir.
Owing to practical implementation of these suggestions, a soft image of Azad Kashmir government will be transmitted to the International community. I pray that this year is the decisive in the freedom movement of Kashmir. And people of same ancestry residing on the other side of the line of control can see each other once again. God be with all of us, Amen.
Post Source: Christians in Azad Kashmir
شیئر کریں