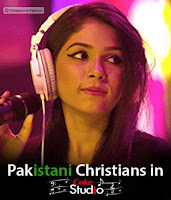 Performing since the age of 12, talented Young Pakistani Christian Girl Nirmal Roy has arrived in the scene with perfectly pitched harmonies and great diction. Getting formally trained since the last two years under the watchful eyes of Abdul Rauf, Roy has already won more than ten competitions, including the ‘Voice of Kinnaird College’ in 2014. Proving her mantle on the original soundtrack for ‘Tera Mera Rishta’, Roy has worked on several musical projects with  Shiraz Uppal. Her debut performance in Coke Studio 9, will sound very different from any genre that she’s more prone to approach.